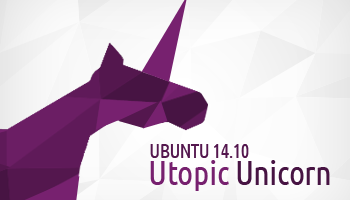 Codenamed "Utopic Unicorn", 14.10 continues Ubuntu's proud tradition
of integrating the latest and greatest open source technologies into a
high-quality, easy-to-use Linux distribution.  The team has been hard at
work through this cycle, introducing new features and fixing bugs.

Under the hood, there have been updates to many core packages, including
a new 3.16-based kernel, a new AppArmor with fine-grained socket control,
and more.

Ubuntu Desktop has seen incremental improvements, with newer versions of
GTK and Qt, updates to major packages like Firefox and LibreOffice, and
improvements to Unity, including improved High-DPI display support.

Ubuntu Server 14.10 includes the Juno release of OpenStack, alongside
deployment and management tools that save devops teams time when
deploying distributed applications - whether on private clouds, public
clouds, x86 or ARM servers, or on developer laptops.  Several key server
technologies, from MAAS to Ceph, have been updated to new upstream
versions with a variety of new features.

The newest Kubuntu, Xubuntu, Lubuntu, Ubuntu GNOME, Ubuntu Kylin, and
Ubuntu Studio are also being released today.  More details can be found
for these at their individual release notes:

Maintenance updates will be provided for 9 months for all flavours
releasing with 14.10.

Users of Ubuntu 14.04 LTS will be offered an automatic upgrade to 14.10
if they have selected to be notified of all releases, rather than just
LTS upgrades.  For further information about upgrading, see:

If you have a question, or if you think you may have found a bug
but aren't sure, you can try asking in any of the following places:

If you would like to help shape Ubuntu, take a look at the list
of ways you can participate at:

Ubuntu is a full-featured Linux distribution for desktops, laptops,
netbooks and servers, with a fast and easy installation and regular
releases. A tightly-integrated selection of excellent applications
is included, and an incredible variety of add-on software is just a
few clicks away.

Professional services including support are available from Canonical
and hundreds of other companies around the world.  For more information
about support, visit:

You can learn more about Ubuntu and about this release on our
website listed below: